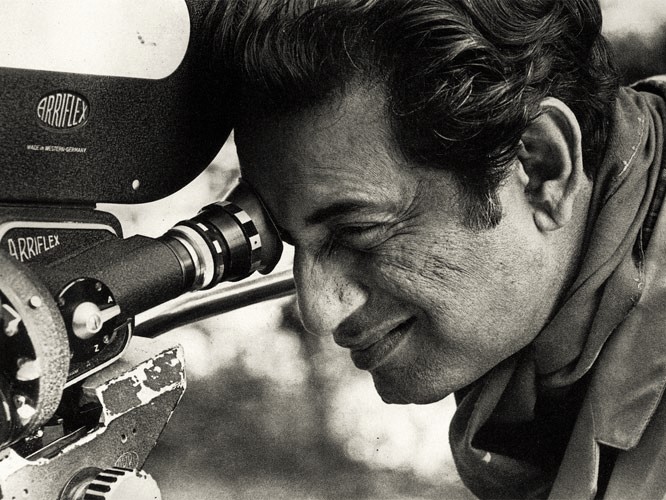 More than sixty years after its premiere, Pather Panchali (Song of the little road) continues to win the hearts of people with its simple yet complex depiction of the human soul. A directional debut of Satyajit Ray, the film is considered the harbinger of a new era of social cinema. Captured in black and white, the film explores the myriad hues of the bucolic life of pre-partition Bengal, full of strife and brimming with poverty. The struggle of the protagonist - a little boy named Apu is epitomized but a sub-narrative revolves around each character, adding gradually to the meta-narrative of the crisis in transient times.    Coincidentally, during the shooting of the film, Ray was also undergoing a personal crisis. He was struggling to fund the project. He had to mortgage jewelry from his family for the initial shooting of the film.  At one point of time, he even had to postpone the shooting. It was only when Dr Bidhan Chandra Roy, the then chief minister of West Bengal agreed to finance the movie, that Ray’s dream became a reality.
Pather Panchali in many ways is a movie of novices with great determination.
Ray’s cinematographer, Subrata Mitra, was completely inexperienced. At the beginning of the production he was only twenty-one and had never held a movie camera in his hands before.  Nevertheless, the cinematic expression in the film is extremely good and an important component to the film’s success. Ray’s artful camera placement added another dimension to cinematic art. If one were to look at the pictures, one would find how brilliantly he played with the character's eye and line of sight while capturing the human emotions on celluloid. The film gives the appearance that it was shot entirely on location, but in fact there were some studio scenes that are seamlessly woven into the presentation. The soundtrack of the film was also composed by an emerging artist who was at the time, the music director of AIR, Delhi but would later go forth to have a marvelous and inspiring international career, revered Ravi Shankar, at the beginning of his music career, composed the soundtrack of the Apu Trilogy, and the effect of the background score echoes in the mind long after the film is over.

Pather Panchali's international recognition.   Ray started the film in 1952 and the film finally premiered on 3 May 1955 during an exhibition at New York’s Museum of Modern Art. It was a huge commercial success, internationally as well as in West Bengal. When Pather Panchali was screened for Western audiences, it was initially compared to Italian Neorealist films, a documentary-style film genre popular at the time that captured life in its raw form. Though there is some semblance in style, Ray’s film was inspired more by the happenings in the local surroundings instead of international scenario, and it began what can be termed as the Indian neo-realist genre.

The movie is adapted from the novel of the same title written by renowned Bengali novelist Bibhutibhushan Bandyopadhyay.
Bibhutibhushan Bandyopadhyay was a prolific writer who wrote over 200 short stories and 16 novels and his works celebrated the rural life of Bengal with his home in a village in Bongaon. A visit to his home is sure to send one to the illusionary universe of Pather Panchali.

It was Bibhutibhushan Bandopadhya’s famous semi-autobiographical Bengali novel that inspired Ray to delve into the life of the Bengal countryside in the 1920s and he precisely represented the conditions of those times. Ray’s first feature covers the first part of that novel, and two of his subsequent films, Aparajito (1956) and Apur Sansar (1959) completed the account. Together the three films on this subject is known as Apu Trilogy.

The story focuses on the life of a deprived family of four living in a small Indian village Nischindipur. The father, Harihar Roy (Kanu Banerjee) is a Brahmin who makes his living by doing religious rituals. But he always dreams of becoming a famous writer. His wife, Sarbajaya (Karuna Banerjee), struggles to make ends meet with the little income. They have a daughter Durga, and a son, Apurba (Apu). They also have a very elderly female relative Indir (Chunibala Devi), who the children refer to as “Auntie”, but given the complicated structures of Indian extended families, her precise relationship to the others is not clear.  What goes on in the film is primarily seen from the multiple focalizations of Sarbajaya, Indir, Durga, and Apu. Durga is fond of Indir and often gives her fruit she has stolen from a wealthy neighbor's orchard. One day, the neighbor's wife accuses Durga of stealing a necklace (which Durga denies) and blames Sarbajaya for encouraging her tendency to steal. Durga is portrayed as a loving and dutiful sister concerned about Apu, her brother. They together enjoy simple nuances of life, whether it may be viewing pictures through a bioscope or watching Jatra (a folk theatre).

Apu’s world is full of wonders till one day his small world is suddenly turned upside down.
The first glimpse of the train in their village creates a lasting impression on his and the mind of the audience. Sarbajaya feels an aura of loneliness when Harihar leaves their house for finding a better livelihood. And the change of season also changes their lives dramatically. Durga dies of severe fever that she catches during the heavy downpour. After Durga’s, demise the family of Harihar leaves their house for Benares on an ox-cart.

Though Apu is the main protagonist of the story, the story of every separate character is as important and well treated and this is the factor that differentiated the film and subsequent realist films from the earlier hero-centric films.

Pather Panchali had no written script. Ray made varied sketches and he created a storyboard based of his drawings and notes prior to the shooting of the movie.


It is perhaps the rambling nature of the film which gives it a timeless expression, of having no beginning and no end. The eye to the details of the narrative transcends one into Apu’s world and the viewers feel as if they are reading a book on celluloid rather than watching a film. It is the same artful narrative that won the film many national and international accolades and worldwide recognition, including the Best Human Document award at the 1956 Cannes film festival and India’s National Film Award for Best Feature Film in 1955.
Nonetheless, Ray also faced bitter criticism for the film.
The nature of the criticism that Ray faced for the film was also as varied as the different hues of life that he wanted to portray. While there were critics who claimed that he had not been too accurate, there were also those who claimed rather sarcastically that he had been a bit too accurate. W. Andrew Robinson, a well-known film critic of the time, criticized Ray for focusing too much on Apu and his family and not on the village life as a whole it as was portrayed in Bandopadhyay’s novel. On the other hand, elite Indian critics denounced the film by saying that they will never watch a film in which peasants are eating with their hands. Nargis Dutt criticised him for depicting Indian poverty and exposing it to the world.

The film’s depiction of society has left a huge legacy for posterity
As UC Berkeley Professor Raka Ray writes in her book Cultures of Servitude: Modernity, Domesticity and Class in India, the film depicts the theme of ‘failed patriarchy’. Though the film revolves around Apu, but it also shows the plight of women in the society. Durga, Apu’s sister is supposed to dedicate her entire life in the care of her little brother and Sarbajaya blames her fate after Harihara leaves them. It is the subliminal theme of ‘failed patriarchy’.

We have come a long way from the days when women had to depend on the patriarchs for their lives but without the realistic depiction of the strife women had to undergo, the situation would not have been changing.

It is shortsighted to assume that the portrayal of poor in the film was shown to ‘expose the poverty' to the world. While the film portrays the struggle of the poor in the village, it also captures their happiness and pleasures of life. The film celebrates the lives of those who were ignored by mainstream cinema. It sings the songs of the unknown heroes. It sings the song of the countryside that was somehow ignored by the elites of the country at that point in time. No wonder the film is still remembered and cited in many studies and continues to inspire filmmakers to be better storytellers.

Login with Google
OR Register With
OR Login With